Two for One at Martinsville 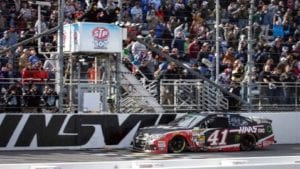 Mother Nature had her way (AGAIN!) with the NASCAR schedule at Martisville. After practice and Cup qualifying were held on Friday, truck qualifying and Cup practices and the Kroger 250 were all scheduled for Saturday. No such luck as intermittent rain showers never gave NASCAR a big enough break to run any events. But it wasn’t until 4:30 PM Saturday afternoon did NASCAR make the call on the Saturday activities. The Kroger 250 would be held after the STP 500.

If you were there early enough on Sunday, you got a little winter mixed in with your breakfast. Snow showers persisted through part of the morning. But by race time, just clouds remained. Even then, skies cleared part way through the race and it was a cold, windy STP win for Kurt Busch.

Later that same day, Matt Crafton brought home the hardware with a victory in the Kroger 250.